Please Note: You are viewing a sold vehicle. This vehicle is no longer available.
Click Here to
Check for Savings

Red 2016 Ford Mustang EcoBoost Premium RWD 6-Speed Automatic with Select-Shift EcoBoost 2.3L I4 GTDi DOHC Turbocharged VCTBoggus Ford has been serving the McAllen area for more than 87 years!! Odometer is 7245 miles below market average! 20/29 City/Highway MPGAwards:* 2016 KBB.com 10 Coolest New Cars Under $25,000 * 2016 KBB.com Brand Image AwardsThis 2016 Ford Mustang EcoBoost Premium will not make it to the weekend!! CALL NOW to reserve your test drive appointment! (956) 686-7411.Reviews:* From a turbocharged four-cylinder to a roaring V8, there are several appealing engine options; sharp and grippy handling when going around turns; lots of interior upgrades give it a classy/high-tech vibe. Source: Edmunds 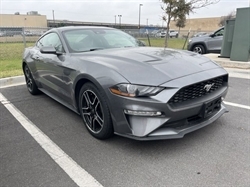 Ready to drive this 2016 FORD MUSTANG? Let us know below when you are coming in, and we'll get it ready for you.